Faculty of Dentistry Universitas Gadjah Mada was first established since the establishment of the Dentistry College in Tegalyoso Hospital, Klaten in 1948. At that time, on 5 March 1948 there was a merger between two Medical College that exist since 1946 in Klaten. The merger between these two college was given name by Medical College and Dentistry which is located in Tegalyoso Hospital, Klaten

On 19 December 1949, this college also merged with the college wich is already exist in Yogyakarta, that is the College of Technic, Law faculty and Literature, Philosophy and Culture under the name STATE UNIVERSITIT GADJAH MADA

Eventhough the Faculty of Dentistry UGM have been officially established, but physically they still don’t have their own building. So, at that time the administration and the education activity was conducted in Mangkubumen. The first education system implemented by freely, strating from the level of Propadeuses, bakaloreat and doctoral/bachelor, start from 1962 gradually used the semester system

In their development, the Faculty of Dentistry used the building on the North Sekip, which is previously used by the IKIP (Now State University of Yogyakarta) and the faculty moved gradually start from 1969 untill 1970.

By various changing and continuous construction, finally they can get the building like the one that exist today. The education system used was semester system, based on the university policy, was changed into the credit system which is started to be introduced on 1974. Through the completion, start from 1976 the Faculty of Dentistry start to implement the credit system by dividing the bachelor degree and Dentist Education. The young Bachelor degree education consist of the preparation level and the bachelor level. This system was prevailed until the end of 1986 and finally by the Rector Decree No. 2 year 1987 The Young Bachelor Degree was erased.

On 30 August 1997, Rector UGM Prof. Dr. Sukanto Reksohadiprojo, MCom officially announced the Stomatognatik Clinic Laboratorium. The aim of those clinic is to improve the students psychomotor on the profession level and to improve the quality of service towards the society.

On 1998, the integrated laboratory of Faculty of dentistry UGM has been established by the Dean’s Decree No: UGM/KG/2279A/UM/01/39 and officially inaugurated by the Faculty of Dentistry Dean; drg. Soetomo Nawai, DPHD, Sp Perio on 29 December 1998

To improve the implementation of community service, Faculty of Dentistry UGM open the Evening Integrated Polyclinic starting from 22 May 2000.

On 2003, Faculty of Dentistry UGM has been occupied the new building with the total building area 8500 m2 which is also the OECF project. This project divided into two units; the office unit and clinic/laboratorium unit. Most of the office unit located on the south side and the clinic and laboratorium unit located on the north side. Those building was officially inaugurated by the Minister of National Education Prof. Drs. A. Malik Fadjar, M.Sc on 6 January 2004.

Based on the history tracking by some of the resource person through the workshop at Yogyakarta on 7 January 2008, it is decided that the Faculty of Dentistry anniversary was on 5 March 1948 (Senate Decree faculty of Dentistry UGM No. 215/SK/J01.1.21/SF/2008) 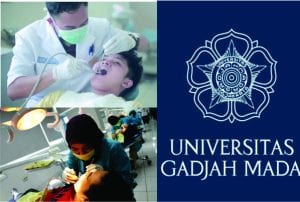